Rebecca took her first overseas trip at age 11 and never looked back. She has since visited 48 countries and all 7 continents. After graduating from Washington University in St. Louis, Missouri, in 1971 with a BA in English, Rebecca began her first career as a middle school teacher of European and non-western cultures. At 40 she started her second career as an entrepreneur with the founding of RHCreations Inc., a boutique manufacturer of cuff links made from authentic postage stamps and images from her travels around the world. Her cuff links were sold at Nordstrom and online at Cufflinks Depot, among others.

For over 30 years Rebecca has hosted visitors from around the world as a member of the International Affairs Council, which is now called International Focus, in Raleigh, North Carolina. She served on the board of directors of the International Affairs Council for 12 years. Rebecca was the first woman president of the Cary Toastmasters Club, and co-president of the Cary Women’s Business Owners Network. She is also a docent at the North Carolina Museum of Art, where has been giving tours for over 30 years, and has been involved with and served on the board of the local Sierra Club.

The idea for Pack for a Purpose evolved from Rebecca’s travels in Africa with her husband Scott. On their second trip they had the opportunity to visit an elementary school. Working with Wilderness Safaris to find out what supplies were most needed, they took 140 pounds of supplies to the children at the school. Seeing the students playing with the first soccer ball the school had ever had, and watching the principal’s joy at receiving the first rulers was a powerful experience for them. Over several more trips with friends and by themselves, they managed to take more than 2000 additional pounds of supplies. On their trip to Kenya, Rebecca asked their travel agent in the states, “Why don’t all your guests use the extra space in their luggage for this?” “Because they don’t think about it” was his reply. That was Rebecca’s aha moment.

Rebecca knew that taking large amounts of supplies required a great deal of time and close logistical cooperation with the touring company. She felt she needed to come up with a simpler and more direct way for travelers to take supplies where they were going. By asking travelers to pack 5 pounds (2.27 kgs.) of supplies, everyday travelers could easily get involved without the need for logistical support. That amount would take only a small space, require little effort, and still make a big impact. In 2014, Rebecca was honored as one of the National Geographic Travelers of the Year. 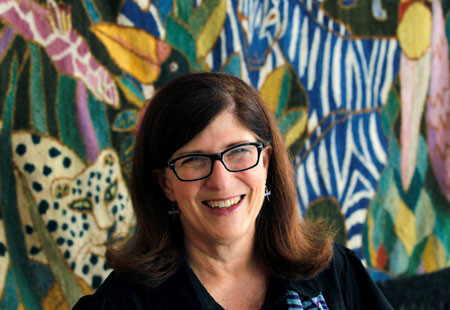