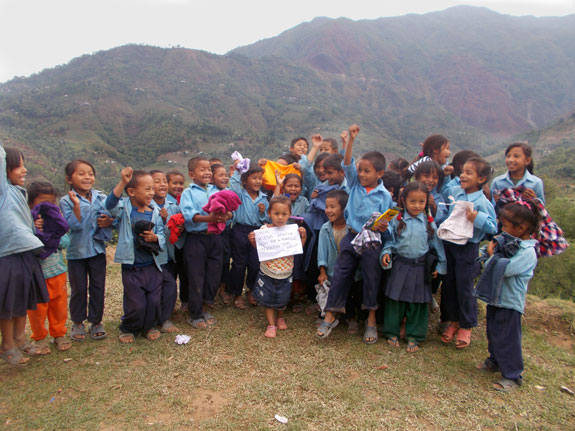 It was a rainy morning in Arlington when I opened up my emails as usual, expecting nothing more than the handful of junk emails, daily news updates, and my Uber receipt from the previous night. I uninterestedly scrolled through a few of the subject lines and then like a surprise from an old friend, I saw it. The words “Trekking Team Group” glowed bright on my phone and I couldn’t seem to open the email fast enough. After what felt like hours to load, my screen was lit up by smiling…no, cheering children. I zoomed into each individual child’s face in the picture. I had never met them. I did not know their names. Yet as I meticulously studied each child with an uncontrollable grin on my face, I imagined what outfit they would choose, which book they would want to read, or what they would draw in their new notebook. And suddenly, just for that small moment, I was transported back in Nepal and I imagined that knew them all.

It had been weeks since I had returned from visiting family in Nepal. I had traveled there on the one year anniversary of the devastating earthquake. Before I left on my trip, I struggled with the idea that with less than two weeks I would not necessarily have time to substantially give back to the country I loved like I had done many times before. Knowing that the effects of the earthquake were not yet forgotten and had only further hindered progress for an already struggling country, I promised myself that I would find some way to make my trip more than just a vacation.

I had heard of Pack for a Purpose years ago and never paid it too much attention, but I figured it was worth a shot. I went to the website and easily found participating locations in Nepal along with detailed lists of their most needed supplies and directions on how the program worked. Immediately, I was skeptical. It was too easy… in less than ten minutes I had the information I needed? No way! After sending a very no nonsense email asking about the logistics for the process and organization, including their communication consistency with the local participants, I was sure that I’d receive a response with some sort of caveat.

Instead, I received an email that started a dialogue with not only the founder of Pack for a Purpose, but also with the participating group in Nepal. The authentic commitment to the mission was apparent from both sides and I was becoming increasingly more excited. Pack for a Purpose gave me a platform to grow the conversation about Nepal by getting my coworkers at SAS involved in the process. The interest and support for this little project was unbelievable and before I knew it my bright orange extra-large suitcase was overflowing with generous donations of children’s clothes, books, school supplies, and more to deliver abroad.

Holding my breath in the overcrowded airport in Nepal I couldn’t help but worry about the potential for the lost luggage. I pretty much leaped onto the suitcase the moment it turned the corner of the conveyor belt. A few days later, I found time to go to the Trekking Team Group in the popular tourist area of Thamel. The manager who I had been communicating with for weeks before my trip greeted me with a welcoming smile. Together we transferred the supplies from the suitcase to the trekking bags as he told me about the school that they supported and the children there. He promised to send pictures during their delivery to the school and after a few more handshakes, I left with empty suitcase and a full heart. I guess it really was that easy.

I came back and fell into the day to day of work and life, but what was achieved with Pack for a Purpose was not forgotten. The conversations at work continued and my friends who had followed my journey via social media were eager to hear more. People continue to be amazed by my “great deed” but the satisfaction comes when I’m able to convince them that it can be theirs too. Pack for a Purpose ensures giving back is easy and impactful. For me, I didn’t just receive a picture in my email that morning, I received a beautiful feeling of hope for what can be achieved with a little space and a lot of kindness.