The feature story below was written by Rob Lelio as part of an assignment for The Selling Power of Storytelling class, Spring 2021, at St. John Fisher College. Doctor Monica A. Hodis, Associate Professor of Marketing, selected Pack for a Purpose as a client for her class. Rob Lelio chose Mark Thacker as the person they wished to interview.

Mark Thacker is an intentional, passionate, and caring man in all aspects of his life. Mark has a long background in sales and sales leadership. He spent the last 12 years of his corporate career as a Vice President of Sales, before started his own company 10 years ago. However, leading large sales teams came at a cost. Mark had to travel often, and it was not the kind of travel that was fun or relaxing. Traveling meant spending most of his time in a hotel, far away from his wife, Pam, who he has been married to for 34 years, and his now grown children, Stef (34) and Kyle (29). Typically, Pam had to play the role of both parents when Mark was away.

As a result of his hectic travel schedule, and the corresponding impact on his life, Mark decided to leave corporate life to become an entrepreneur. He wanted to help small business owners overcome the issues they were having with the sales portion of their business. As Mark put it, “There’s something magical that happens in your 40’s and 50’s where you kind of go ‘Hey I want to give back.’ It is not all about the money and status. You can’t take that with you anyway.” That was the moment Mark realized he could do and be more. Along with his business partner, Mark built the nation’s first outsourced/fractional VP of Sales organization. Mark’s organization now has over 160 fractional/outsourced VP of Sales in the US, Canada and China. Similar to what Mark’s company provides for others, Mark now has greater flexibility to travel and enjoy many adventures with his wife Pam, who was the one who introduced him to Pack for a Purpose. 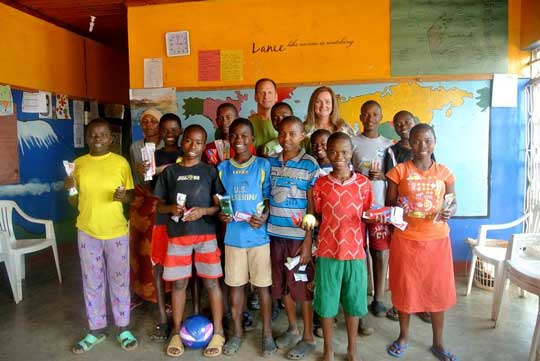 In 2014, Mark and Pam were able to travel to Tanzania, where they successfully summited Mount Kilimanjaro. In their planning for their trip, Pam became aware of Pack for a Purpose. The hotel where they were going to stay had an affiliation with Pack for a Purpose. Mark and Pam gained the assistance of their church and put together a package of needed items for an orphanage in Tanzania. When Mark and Pam arrived at their hotel, they knew their first day in Africa was supposed to be a rest day before they began climbing. However, the hotel owner asked them if they wanted to personally deliver what they brought to the orphanage. How could they say no? So, they used their “rest day” to go to the orphanage. It turned into 3-4 hours of playing basketball and soccer with the kids, hanging out with them, and getting to know them. They were overjoyed to immediately see the impact of their gifts. In Mark’s words, “We did not rest like we were supposed to, but we really enjoyed our time there. After that visit, we were hooked. Now, as part of each trip we take, we find a way to make an impact on those around us.” 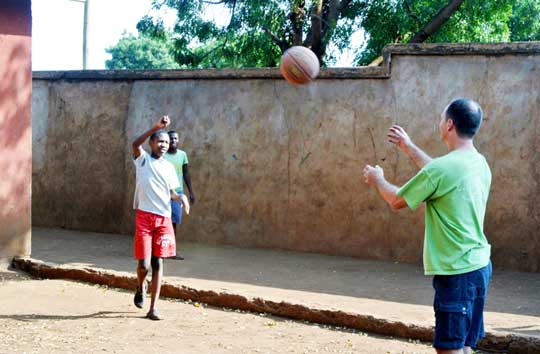 After being part of Pack for a Purpose for a little over 2 years, Mark and Pam have been able to go on numerous trips and they look forward to more in the future. Through their travels, they got to know Rebecca and her organization well. That greater knowledge really gave Mark and Pam a deeper sense of belief in Pack for a Purpose’s mission. Through participating and giving financially, Mark was offered to be on the Board for Pack for a Purpose. He intends to add value to the Board through his years of sales experience and mission-oriented mindset. Mark and Pam are passionate and excited about what Pack for a Purpose is accomplishing around the world and they hope that impact continues for years to come!